It didn’t go unnoticed. After a couple of shows in early 2019, Manage Your Damn Money, Ben & Malcolm went dark. No new episodes. No tweets. No posts on Instagram or Facebook. At the open of Season 4 of #MYDM, Ben & Malcolm finally share the tea behind why they were gone for so long... And we promise, the story is way more interesting than you could ever imagine. Pick your platform. Listen to this episode now! Hosts: @mydm1 and @malcolmonmoney Music: @beatsbybeemen Speak you

Lost Files from 2018: Becoming an Entrepreneur, But Not Starting from Scratch

On Manage Your Damn Money we often talk to and about entrepreneurs who are working on an idea that they know is going to change the world. But what if your entrepreneurial dreams aren’t motivated by some amazing idea you just have to get out, but by a desire to make a majority of the money in the business? On this previously lost episode of MYDM, we are exploring alternative paths to entrepreneurship that skip some of the natural growing pains of building something from scrat

New Episode: Taking Your Side Hustle to the Next Level with Very Smart Brothas' Co-Founder Panam

Wondering how you can turn that lemonade stand into a world renowned beverage brand? Or at least how to make a few bucks from that moonlight activity you love? We explore what it takes to convert your side hustle into a full blown money-making enterprise with the Co-Founder of Very Smart Brothas, Panama Jackson. Ben & Malcolm also cover the fallout from ABC's cancellation of Roseanne and welcome the show's very first live, in-studio audience. Pick your platform. Listen to thi 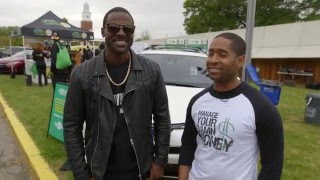 Cannabis, Metro Fare Cards and Lance Gross at BC Fest 2016

MYDM hit the streets of Broccoli Fest 2016 to talk to festival goers about what they spent money on in preparation for the DC music festival. We spoke to three cannabis enthusiast and to actor Lance Gross about the importance of money management as a Hollywood heartthrob. #artistprofiles #saving #artsepreneurship 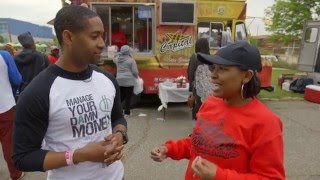 We took our talents and camera to Broccoli City's 2016 music festival to talk to "food-truck-preneurs" to understand the ins and outs of selling food out of a bus-like automobile. #artsepreneurship #smallbusiness

Kanye West: A Starving Artist Who Just Wants to Create

I believe Kanye West Rants to be a national treasure, worthy of showcase inside Washington, DC’s most important museums. I’d suggest the placement of transcripts of major Kanye-Rants a few rooms away from the Civil Rights Act of 1964 or at least next door to First Lady Michelle Obama’s 2013, Thom Browne inauguration coat. Any time over the last decade we’ve heard Kanye Yeezy West give an in-depth interview, author a tweet or publish a letter he wrote to his pen pal, we knew t

I live in a “suburbanish" neighborhood just north of the northwest corridor of Washington, DC. This means my wife and I were involved in the Hunger Games like sport of getting as prepared as possible for the arrival of Winter Storm Jonas and it’s 25 plus inches of snow it’s dumped all over the northeastern region of the United States. Preparation for such an event involves the purchase of several bottles of red wine, six packs of craft beer and a pack of Chips Ahoy! cookies

MYDM Side Hustles: McKenzie Renae Wants to Inspire Women to be Beautifully Themselves

What is McKenzieRenae.com? What inspired you to start blogging about fashion and beauty trends? McKenzieRenae.com is a lifestyle brand focusing on beauty, fashion, and self reflection. It all started back in college at Hampton University when I was pursing a career in makeup artistry. I started my own makeup business called "Mak Does My Makeup" where I did all the girls makeup before all the big parties and events. Friends and clients would often have similar makeup and skin

Money, Music, Marriage and Making It All Work

Cash and Earle are a married couple who have a joint relationship with music. We talk to the happy couple about the ins and outs of managing family finances and how they took their relationship from romancing to performing. To learn more about Cash and Earle, visit www.cashandearle.com. Follow Cash and Earle on Instagram. #artistprofiles #artsepreneurship #MYDMSideHustles

5 Things You Should Learn From Oprah's Investment in Weight Watchers

This piece orginally appeared on Blavity.com. On Monday, news broke that media titan Oprah Winfrey purchased a 10 percent stake in Weight Watchers International. Winfrey purchased her allotment of shares at the stock price of $6.79 per share with a total investment of $43.2 million. On Monday evening, Weight Watcher’s stock price increased to almost $14 per share. Why should this news be important to you? Let’s put it this way. If you were lucky enough to have taken $1000 of

What is the Tin Lizzy Mobile Boutique? What inspired you to start this as a business? Tin Lizzy Mobile Boutique is my little boutique on wheels. I travel the DMV area setting up shop at various locations- street fairs, festivals, popping up on the side of the street, private parties, fundraisers, basically anywhere I can! I have always had dreams of owning my own business. I went to school for fashion then worked for various fair trade organizations and decided I wanted to op

Ben Carter Explains How to Travel on a Budget

Manage Your Damn Money host Ben Carter gives us 60 seconds filled with tips on how to travel on a budget. #artsepreneurship #smallbusiness

It’s back to school season and Ben Carter of Manage Your Damn Money brings you 60 seconds of financial empowerment tips on how to manage some of those student loans! #artsepreneurship #smallbusiness

Ben Carter of Manage Your Damn Money brings you 60 seconds of financial empowerment delivered the only way he knows how – with humor and wit. Watch the video for his quick tips on budgeting for your small business. #artsepreneurship #smallbusiness

​ Visual artists Michelle Izquierdo sits down with Ben Carter to talk about how she changed her passion for creating art from a hobby to an income stream and the challenges she faced in coming to understand the true value of her craft. Michelle's upcoming art show, titled "Spirit" is scheduled for Saturday, September 12 at Studio 52 in Washington, DC. Visit www.michelleizquierdo.com for more about her work and the show. Follow Michelle on Instagram @izquierdo_art. Register fo
bottom of page